Like us on Facebook, follow us on Twitter! Check out our new tumblr page. :)
Manga News: Toriko has come to an end; but be sure to swing by and share your favourite moments from the series!
Manhwa & Manhua News: Check out the new Manhwa and Manhua shout-out (March 2016).
Event News: One Piece Awardshas concluded. Check the results Here!
MangaHelpers > Manga > Browse > Kachou Shima Kousaku
Home
Chapters
Translations
RSS 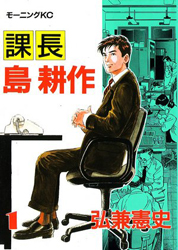 Kousaku Shima is a section chief of the Electronic Giant Hatsushiba. He gets involved with a lot of women, conspiracy inside the company, while he goes up and down the corporate ladder. Written in a span of nine years from 1982 to 1991, Kosaku Shima's character gradually changes from that of a normal, ambitious salaryman in the beginning as he emerges in the end to become a sort of a "super salaryman," a typical stereotype of the Japanese businessman. It has been made into a movie starring Toshihiko Tahara.