Like us on Facebook, follow us on Twitter! Check out our new tumblr page. :)
Manga News: Toriko has come to an end; but be sure to swing by and share your favourite moments from the series!
Manhwa & Manhua News: Check out the new Manhwa and Manhua shout-out (March 2016).
Event News: One Piece Awardshas concluded. Check the results Here!
MangaHelpers > Manga > Browse > Let's Bible
Home
Chapters
Translations
RSS 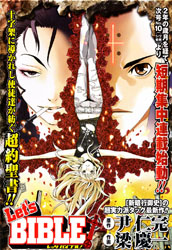 This is a two-part story by the creators of Shin Angyo Onshi: Youn In-Wan and Yang Kyung-Il.

Prologue:
Vulcan Markovic lives in a small fishing village in Croatia. He has only two things on his mind--designer goods and losing his virginity. When an indescribably beautiful girl shows up asking for directions to Heaven's Gate, Vulcan takes his first step into "thrilling world-salvation action!!" [From etc]

After this one-shot, the authors made a short manga of 4 chapters. The story of the war between the Heaven and the Hell is not finished...

The genius Chinese buddhist monk Haomei is surprised to have his studies interrupted one day by a flaming bus soaring through the air and crashing. He is even more shocked that there is a survivor, a girl who calls herself Jesus of Nazareth. Soon, a descendant of Lucifer shows up at the temple to make sure Jesus is good and dead. Will Haomei's buddhist powers be strong enough to protect Jesus from the descendants of Lucifer? [tethysdust]

interesting.but the one shot just doesn't add up to the description . the guys is a monk who rescued a girl from a burning bus. .. guess there's more later on. but thats my take. Permalink " "
Review by Reminiscence

Short and sweet, though I think the main battle scene seemed sort of awk.

The description is right - since only the last paragraph pertains to this work. Permalink " "