Like us on Facebook, follow us on Twitter! Check out our new tumblr page. :)
Manga News: Toriko has come to an end; but be sure to swing by and share your favourite moments from the series!
Manhwa & Manhua News: Check out the new Manhwa and Manhua shout-out (March 2016).
Event News: One Piece Awardshas concluded. Check the results Here!
MangaHelpers > Manga > Browse > LEVEL E
Home
Chapters
Translations
Thread
RSS 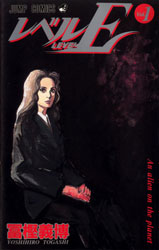 Tsutsui Yukitaka was a freshman who had just entered a high school, and he was hoping to be a good baseball player. When he moved to a new apartment, there was a man in the room. He said he was an alien and lost his memory.
Actually, he was the first prince of Planet Dogra, and he was the man who had the best brain and the worst nature.