Like us on Facebook, follow us on Twitter! Check out our new tumblr page. :)
Manga News: Toriko has come to an end; but be sure to swing by and share your favourite moments from the series!
Manhwa & Manhua News: Check out the new Manhwa and Manhua shout-out (March 2016).
Event News: One Piece Awardshas concluded. Check the results Here!
MangaHelpers > Manga > Browse > Mangaka-san to Assistant-san to (4-Koma Version)
Home
Chapters
Translations
RSS 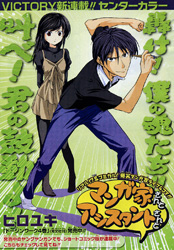 This is a series of shorts (4-koma) to the original manga "Mangaka-san to ashisutanto-san to." Yuuki is a perverted manga-ka who does as he pleases, which drives his assistants and editor up the wall. The contents and characters are pretty similar to the main manga, only that the 4-koma version tells more of Yuuki at work (or not), in detail. Characters are introduced from the start again, so no need to jump between the two versions to know who's who! Now we can finally find out why Yuuki's always late for deadlines (on one occasion he procrastinates just so he can prolong being alone with Ashisu, his assistant, in his apartment/office).

There is also development of the side characters, whereby more details on their personalities, likes and dislikes, are revealed (or rather, revealed quicker than in the main manga). This is good for those who just want a quick read for some giggles but also be able to know the manga enough to not lose the plot along the way (although, there isn't a real plot yet). [6gatsu]