Like us on Facebook, follow us on Twitter! Check out our new tumblr page. :)
Manga News: Toriko has come to an end; but be sure to swing by and share your favourite moments from the series!
Manhwa & Manhua News: Check out the new Manhwa and Manhua shout-out (March 2016).
Event News: One Piece Awardshas concluded. Check the results Here!
MangaHelpers > Manga > Browse > Oretachi no Tatakai wa Kore Karada
Home
Chapters
Translations
RSS 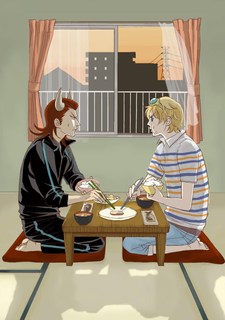 Ages ago, in a different world, there was a long war between humanity and the demonic world for control of land. After decades of warfare, it came down to a final battle between the hero and the demon lord. The fight lasted for an eternity, but, in the end, they both slipped and fell into a pit.

Where the hero and the demon lord ended up was modern day Chiba in Japan. With no means of getting back or even money to survive, mortal enemies were forced to join forces to survive. Now living pathetically as roommates in a small apartment, at a job that barely pays for the bills, the hero that was once admired by all his people and the demon lord that commanded legions of minions have to put their heads together to live. [vyc]