Like us on Facebook, follow us on Twitter! Check out our new tumblr page. :)
Manga News: Toriko has come to an end; but be sure to swing by and share your favourite moments from the series!
Manhwa & Manhua News: Check out the new Manhwa and Manhua shout-out (March 2016).
Event News: One Piece Awardshas concluded. Check the results Here!
MangaHelpers > Manga > Browse > Shade: The Other Side of Light
Home
Chapters
Translations
RSS

Shade: The Other Side of Light 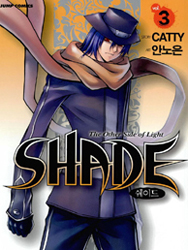 Hyung Gee is an ordinary high student, but is unaware of the power he holds called “Shade”. His encounter with Soy completely changes his life around, as the hidden powers within him awakens, causing Soy and her Shade to lose their lives. Unaware of the mystery behind “Shade” and the role of a “Shade Magician”, Hyung Gee decides to join ‘School’, which is an organization that does research on “Shade Magicians”. Although Hyung Gee joined to find out more about his powers and his parents (who are currently missing), little does he know that this was all a plot from the School to get him to join.
[Hidoi~! Translators]