Like us on Facebook, follow us on Twitter! Check out our new tumblr page. :)
Manga News: Toriko has come to an end; but be sure to swing by and share your favourite moments from the series!
Manhwa & Manhua News: Check out the new Manhwa and Manhua shout-out (March 2016).
Event News: One Piece Awardshas concluded. Check the results Here!
MangaHelpers > Manga > Browse > Star Children
Home
Chapters
Translations
RSS 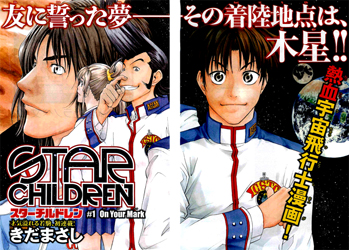 In a near future where humans have safely traveled to Mars, the space program is looking to go to Jupiter for the first time in history. For Subaru Yuuto, Amami Kosei, one of the elite astronauts of the crew of Jupitonia (the ship heading to Jupiter), is not only a person that he looks up to but is also a dear friend of many years. But tragedy strikes and a malfunction causes an explosion in Jupitonia and the ship goes missing in deep space, most believing the crew to be dead.

Even with the devastating loss of a friend and hero, Yuuto joins the Core Space Academy to become a super class astronaut (aka Sirius) just like Kosei once was and explore parts of the universe that has not yet been known to man. The competition is cutthroat and he has to become the best of the best if he wants to be where his hero once was. Although the fear of the unknown is immense, Yuuto must learn to overcome it and become the hero for the next generation. [vyc]