Like us on Facebook, follow us on Twitter! Check out our new tumblr page. :)
Manga News: Toriko has come to an end; but be sure to swing by and share your favourite moments from the series!
Manhwa & Manhua News: Check out the new Manhwa and Manhua shout-out (March 2016).
Event News: One Piece Awardshas concluded. Check the results Here!
MangaHelpers > Manga > Browse > Tonari no Masami-chan
Home
Chapters
Translations
RSS 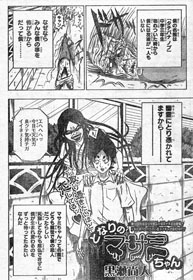 Tachibana Nobu has absolutely no friends because of Masami, a ghost that has been haunting him for the longest time. Apparently, in his previous life, Nobu was Masami’s lover and she has been waiting for him to be reincarnated. Masami’s presence scares everyone away from Nobu, including every single one of his classmates. He hasn’t had a conversation with them in years let alone be friends with him. Masami is already driving Nobu crazy and if he doesn’t get rid of her fast some how, he might literally go insane from solitude even if he is in the city. [vyc]