Like us on Facebook, follow us on Twitter! Check out our new tumblr page. :)
Manga News: Toriko has come to an end; but be sure to swing by and share your favourite moments from the series!
Manhwa & Manhua News: Check out the new Manhwa and Manhua shout-out (March 2016).
Event News: One Piece Awardshas concluded. Check the results Here!
MangaHelpers > Manga > Browse > Usotsuki Roid
Home
Chapters
Translations
RSS 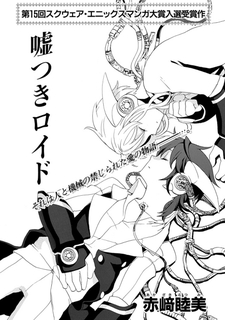 It is the 22th century and technology has advanced to the point that there are more androids than humans because of the declining human population. For that reason, women are considered to be of the highest importance and have an individual robot for the sole purpose of protecting them and taking care of their daily needs. However, when they reach puberty, they are separated from their android to be schooled.

A young girl named Rinne was assigned an android named Ka-In that was made to resemble her late father. Rinne grows more attracted to Ka-In each day and
Ka-In in return can not help but feel compassion and protective of her. Rinne proposes that the two run away together and live without the fear of being separated. Ka-In has to make a decision between choosing his love for Rinne or following his duty as an android. [vyc]