Like us on Facebook, follow us on Twitter! Check out our new tumblr page. :)
Manga News: Toriko has come to an end; but be sure to swing by and share your favourite moments from the series!
Manhwa & Manhua News: Check out the new Manhwa and Manhua shout-out (March 2016).
Event News: One Piece Awardshas concluded. Check the results Here!
MangaHelpers > Manga > Browse > Wanna Be Hero
Home
Chapters
Translations
RSS 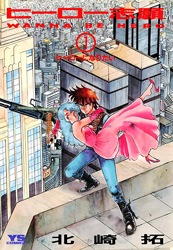 Ever since he was a child, Tachibana Hideo has wanted to become a superhero like in the TV shows he watched. After he graduated from high school, he got into the Kantou Films School to chase this dream. In the summer beforehand, he managed to get a part-time job as a costumed villain for a "Crashman" heroes live show. Unfortunately, he got a little too into it, kicked the heroic "Crash Pink" in the face, and got himself fired. As he later discovered, Crash Pink was his future classmate and aspiring actress, Mutou Sakurako! Livid that he'd dare damage her precious face, she insisted that he make up for the injury, mostly by putting up with her constant efforts to torment him. But as they spend time together, could something much sweeter than mutual annoyance be growing between them?
[tethysdust]