Like us on Facebook, follow us on Twitter! Check out our new tumblr page. :)
Manga News: Toriko has come to an end; but be sure to swing by and share your favourite moments from the series!
Manhwa & Manhua News: Check out the new Manhwa and Manhua shout-out (March 2016).
Event News: One Piece Awardshas concluded. Check the results Here!
MangaHelpers > Manga > Browse > Zegapain XOR
Home
Chapters
Translations
RSS 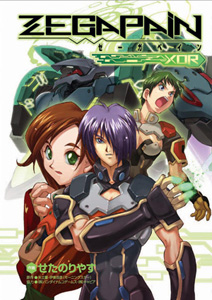 Related to the anime "Zegapain." Toga lives peacefully with a girl called Mio, but he has disturbing dreams involving violence, giant robots, and a girl named Sara. Soon he learns that his dreams are really fragments of his lost memories, and Mio and others lead him back into the world where he is a gunner for a giant robot called a 'Zegapain.' He is also re-united with Sara, but what will they be to each other now? [tethysdust]