Like us on Facebook, follow us on Twitter! Check out our new tumblr page. :)
Manga News: Toriko has come to an end; but be sure to swing by and share your favourite moments from the series!
Manhwa & Manhua News: Check out the new Manhwa and Manhua shout-out (March 2016).
Event News: One Piece Awardshas concluded. Check the results Here!
MangaHelpers > Manga > Browse > .hack//4koma
Home
Chapters
Translations
RSS 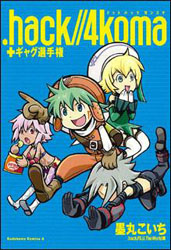 A collection of .hack parody in 4 koma format. The daily Kite and his comrade's adventures. .hack//4koma is a Project .hack and .hack Conglomerate parody featured in the .hack//G.U. The World magazine. It follows the traditional yonkoma format (four vertical panels). It parodies many aspect of the series with non-canon meetings between characters from both universes. A video version of 4koma is introduced in Volume 3 of the games. [.hack wiki]