Like us on Facebook, follow us on Twitter! Check out our new tumblr page. :)
Manga News: Toriko has come to an end; but be sure to swing by and share your favourite moments from the series!
Manhwa & Manhua News: Check out the new Manhwa and Manhua shout-out (March 2016).
Event News: One Piece Awardshas concluded. Check the results Here!
MangaHelpers > Manga > Browse > Kochira Katsushikaku Kameari Kouenmae Hashutsujo
Home
Chapters
Translations
RSS 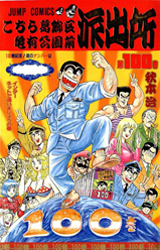 The typical Kochikame plot involves Ryo-san coming up with a money-making scheme by inventing a new gadget or capitalizing on a fad, achieving great success, calling on Nakagawa's help as things turn sour, and finally losing it all as the fad runs out of steam or out of control. While the plots are gag-driven, much of the humor comes from the juxtaposition of mundane characters with the bizarrely incongruous (Nakagawa's wealth, Maria's appeal, everyone's lack of actual police work), most of which is never explained or rationalized in the slightest.

Kochikame has a broad audience, ranging from adolescent boys to middle-aged salarymen. Much like Homer Simpson, Ryo-san's antics appeal to children who can laugh at an old buffoon and to men fearing that they are becoming old buffoons themselves. The stories are generally innocent in content, and what little violence appears is comical, while the occasional risqué subjects are included strictly for laughs rather than to titillate. In another parallel to The Simpsons, Kochikame's immense popularity has lead to guest appearances in the strip by Japanese celebrities such as Tetsuya Komuro.