Like us on Facebook, follow us on Twitter! Check out our new tumblr page. :)
Manga News: Toriko has come to an end; but be sure to swing by and share your favourite moments from the series!
Manhwa & Manhua News: Check out the new Manhwa and Manhua shout-out (March 2016).
Event News: One Piece Awardshas concluded. Check the results Here!
MangaHelpers > Manga > Browse > Toriko
Home
Chapters
Translations
Forums
RSS 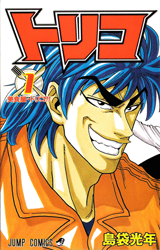 In the world where the taste and texture of food are very important there is Toriko a hunter of precious foods regularly hired by restaurants and the rich , a man with inhuman skills to capture the ferocious, evasive and rare animals to complete his ultimate dinner course and then his current accomplice a weak timid person who was inspired by toriko's greatness and accompanies him on all his journeys on his quest for the course of his life.

In the weeks after Toriko first appeared in Weekly Shounen Jump it stayed in the top ranks, counter to what usually occurs to most new series. What was at first attributed to 'editor love' has now been realised as a surefire hit, edging out Bleach multiple times in the Table of Contents to turn what was formerly called "The Big Three" into a potential "The Big Four". The Japanese readers rate this highly, so a whole lot of people can't be wrong (excuse me for invoking argument ad populum).

Toriko is about a character who lends their name to the manga. He is a Bishokuya, or Luxury Food Provider of an organisation called the IGO (International Gourmet Organisation). His job is to hunt down creatures to sell for exorbitant prices. The stronger the creature the more they are worth. But that isn't his ultimate aim. His ultimate aim is to fill out his "full course meal", a meal comprised of a number of different dishes ranging from entre to dessert. Toriko is contracted by a weak and timid chef named Komatsu to provide Galala Alligator meat for a banquet at his restaurant. After watching Toriko beat and eating the Galala Alligator Komatsu decides to go along with him. The story follows Toriko and Komatsu and Toriko's aim to create his ultimate meal.

If the preceding summary makes you think this manga is not worth reading because you don't want to read some boring manga about a guy who is looking for food then you should think again. I was initially hesitant to start reading based on this fact, but after having read all the chapters released up till now I am glad I finally got around to it. While the underlying plot point is Toriko deciding what to put in his ultimate meal that is not the main part of the manga. Rather it centers around Toriko and his friends and allies and their battles in capturing the hard to capture creatures of the world. And those creatures are hard to capture let me tell you. They range from alligators the size of a bus, all the way up to a mammoth whose footprint is as large as a house, and they don't go down without fighting either. To make matters worse the Bishokuya of the IGO who are opposed by other powerful organisations who are looking to capture those creatures themselves.

In addition to what the story appears to be about the other thing likely putting people off is the art work. The characters aren't the prettiest to look at, that's for sure. But they have their own unique charms and personalities, as well as fighting styles. The real stars are the mosnter designs. Shimabukuro has a real talent for coming up with original, distinctive, and scary creatures. The backgrounds are very decent as well. The fights scenes are very well drawn and paced, you can really feel the energy of the fights.

The art along with the characters are meant to be reminiscent of 1980s action mangas. A little explanation: in the 1980s quite a few of the action mangas features protagonists who were already super strong and powerful, defeating many foes with ease. This in contrast to action manga of the 90s and 2000s where the protagonist usually starts off either weak, or marginally strong, and works their way up through stronger and stronger opponents gaining strength each time. Toriko brings this style of protagonist back to audiences, in contrast to many off the shonen action manga available today. It's not neccesarily wrong, infact doing so allows us to get into the big fights even earlier - no need to watch him work his way up through weaker monsters.

While you might have some...believeability issues, such as the inflation rate for animal meat going through the roof, and how does a crab have muscle, but Toriko is so fun that you will be willing to put aside quibbles like that and just enjoy it. If you are looking for some nice shonen action, interesting characters, great plot, and another series to look forward to every week, then pick up Toriko and read it. Permalink " "
Review by Cococrash11

Its intersting and looks delicous. Permalink " "