Like us on Facebook, follow us on Twitter! Check out our new tumblr page. :)
Manga News: Toriko has come to an end; but be sure to swing by and share your favourite moments from the series!
Manhwa & Manhua News: Check out the new Manhwa and Manhua shout-out (March 2016).
Event News: One Piece Awardshas concluded. Check the results Here!
MangaHelpers > Manga > Browse > 13 Game
Home
Chapters
Translations
RSS 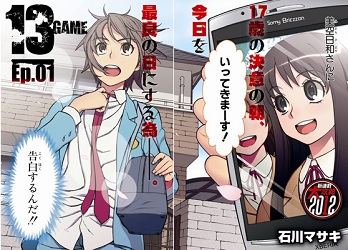 On his seventeenth birthday, Amamiya Kota was going to ask his classmate Misora Hiyori out. Tragically, he dies in a car accident but is given a second chance back in the living world on borrowed time. He gets entered into a competition called the 13 Game where other people like Kota who were supposed to die return back to the world and given an option: locate and kill 13 other players or suffer the fate of death. Each player is assigned to a handler, mysterious beings with special powers, who use them as if they were characters in a video game. Kota’s handler, Merume, explains that there are players like him all over the country, each with a unique ability that helps them kill, and Kota has to kill 13 players within 1 year. With his demon hands ability that was inspired from his hobby of magic tricks, Kota must unwillingly participate in this cruel game if he wants to live. [vyc]