Like us on Facebook, follow us on Twitter! Check out our new tumblr page. :)
Manga News: Toriko has come to an end; but be sure to swing by and share your favourite moments from the series!
Manhwa & Manhua News: Check out the new Manhwa and Manhua shout-out (March 2016).
Event News: One Piece Awardshas concluded. Check the results Here!
MangaHelpers > Manga > Browse > 69
Home
Chapters
Translations
RSS 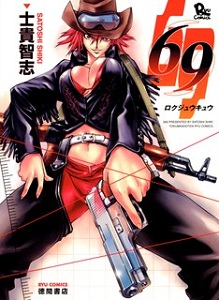 In the early 19th century, an archipelago was discovered in the middle of the Pacific Ocean. Its biggest island was named Rizoslug and it became an independent nation after the second world war. Kazuno is a transporter on Rizoslug. She delivers sensitive or dangerous items to clients safely and has built up a reputation as a reckless but effective transporter. Her most recent job has her escorting a girl named Sheffard from Rizoslug to Japan, but they are immediately attacked by an unnamed group. Although they escape, they learn that Sheffard is somehow so critical that countries are willing to do anything to get their hands on her. [vyc]