Like us on Facebook, follow us on Twitter! Check out our new tumblr page. :)
Manga News: Toriko has come to an end; but be sure to swing by and share your favourite moments from the series!
Manhwa & Manhua News: Check out the new Manhwa and Manhua shout-out (March 2016).
Event News: One Piece Awardshas concluded. Check the results Here!
MangaHelpers > Manga > Browse > Chrome Breaker
Home
Chapters
Translations
RSS 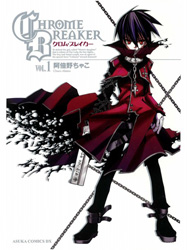 A girl named Nagisa Akira, is said to be the reincarnation of the Virgin Mary aka Maria's Daughter. The Vatican, realizing this, has sent one of its elite agents, Takagi Chrome, code named “Crimzon” to protect her. Chrome is one of the elite assassins directly under the control of the Vatican, used to carry out terrorist acts and the assassination of world leaders. Kuromo's new mission is to protect Akira so that she does not fall under the hands of the Protestant English. Thus begins the journey to protect Maria’s Daughter, and to find out about Chrome’s mysterious demonic power.