Like us on Facebook, follow us on Twitter! Check out our new tumblr page. :)
Manga News: Toriko has come to an end; but be sure to swing by and share your favourite moments from the series!
Manhwa & Manhua News: Check out the new Manhwa and Manhua shout-out (March 2016).
Event News: One Piece Awardshas concluded. Check the results Here!
MangaHelpers > Manga > Browse > Judge
Home
Chapters
Translations
Thread
RSS 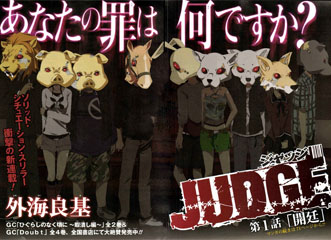 "What is your crime?" From the author of Doubt, it's time for a new terrible game, Judge. Hiro's brother Atsuya is dating Hiro's childhood friend and secret crush Hikari. Hiro's affection for Hikari will lead him to commit an un-punishable crime against his older brother. At least, he thinks it is un-punishable, until he is kidnapped and imprisoned by a group of people wearing animal masks. The judging is about to start!
[tethysdust]