Like us on Facebook, follow us on Twitter! Check out our new tumblr page. :)
Manga News: Toriko has come to an end; but be sure to swing by and share your favourite moments from the series!
Manhwa & Manhua News: Check out the new Manhwa and Manhua shout-out (March 2016).
Event News: One Piece Awardshas concluded. Check the results Here!
MangaHelpers > Manga > Browse > Dot Invader
Home
Chapters
Translations
RSS 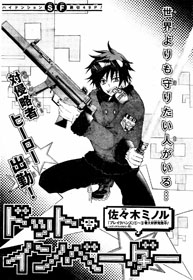 The year is 2012 and Japan is under attack by an alien race that looks similar to the space invader game. Their ray beams infect human cells and crystallize them, turning humans into pixilated figures. Tobita, nick named “the hero” because of his immunity against the ray beams, is a member of the Invader Shooter Unit (ISU), the first line of defense against the aliens. Tobita’s old friend Minamoto Saya is recruited by the ISU to translate the alien language but there's just one thing: Saya's been infected! [vyc]