Like us on Facebook, follow us on Twitter! Check out our new tumblr page. :)
Manga News: Toriko has come to an end; but be sure to swing by and share your favourite moments from the series!
Manhwa & Manhua News: Check out the new Manhwa and Manhua shout-out (March 2016).
Event News: One Piece Awardshas concluded. Check the results Here!
MangaHelpers > Manga > Browse > Amaenaideyo!!
Home
Chapters
Translations
RSS 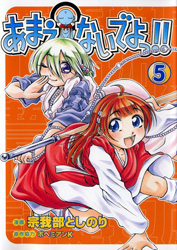 The protagonist of the series is the lecherous Satonaka Ikkou, who transforms into a super-monk (being able to perform mass exorcisms) by his lust for the girls he live with. He lives in the Saien Temple as a Buddhist priest in training with six other nuns: Amanogawa Haruka, Ikuina Sumi, sisters Sugai Sakura & Hinata, Nambu Chitose and Atouda Yuuko, each of whom represents one of the bosatsu of the six lower realms of the traditional Buddhist cosmology. Chitose is the other main character and has a strange relationship with Ikkou; he seems to be in all the wrong places at all the wrong times, but they really care for each other in all actuality. A side effect of Ikkou using his ultimate power is that immediately afterwards he turns into an even bigger pervert that he normally is. The series is about Ikkou's self-destructive power and his attempts to control his own super-sensual sphere/powers.