Like us on Facebook, follow us on Twitter! Check out our new tumblr page. :)
Manga News: Toriko has come to an end; but be sure to swing by and share your favourite moments from the series!
Manhwa & Manhua News: Check out the new Manhwa and Manhua shout-out (March 2016).
Event News: One Piece Awardshas concluded. Check the results Here!
MangaHelpers > Manga > Browse > Apollo ni Sayonara
Home
Chapters
Translations
RSS 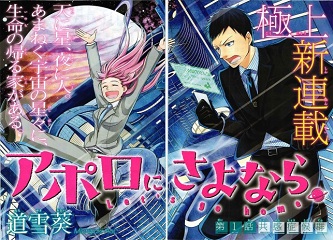 After the Earth was struck by a meteor, humanity began to move out into space, spreading across many different worlds. The GIS real estate company has an important job: finding people the homes that they desire across a variety of different planets.

The main character awoke after a serious illness and found that everything but his brain had been replaced by a mechanical human body. The trauma apparently affected his memory as well, and he couldn't remember who he was or where he came from. He had a frustrating sense, though, that he had a home he should go to and people who were waiting for him.

With no way to find them, he is passing the time as a GIS real estate agent. He and his colleagues take on cases from many different kinds of people, and he learns about their lives and their troubles as he helps them find a home of their own. [tethysdust]