Like us on Facebook, follow us on Twitter! Check out our new tumblr page. :)
Manga News: Toriko has come to an end; but be sure to swing by and share your favourite moments from the series!
Manhwa & Manhua News: Check out the new Manhwa and Manhua shout-out (March 2016).
Event News: One Piece Awardshas concluded. Check the results Here!
MangaHelpers > Manga > Browse > Ausdyn
Home
Chapters
Translations
RSS 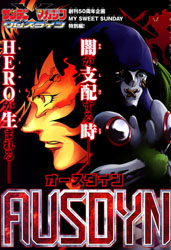 For a period as long as eternity, there has been chaos throughout the central section of the city, and within that chaos are humans with abnormal abilities, and due to their abilities have contributed to a majority of murders, they have been called the "KNOCKERS," those who knocked on the door to hell. The story revolves around the KNOCKERS themselves, where fierce battles occur between the powerful KNOCKERS, ones with masks and have their identities hidden. However, unlike Minezaag, Ausdyn focuses on the heroic attitude that lies behind the actual battles. Z-END and Volcano, both of which were thought to be nonexistent, appear in the center of the battle and fight to the death to put an end to the chaos! [Mamo]