Like us on Facebook, follow us on Twitter! Check out our new tumblr page. :)
Manga News: Toriko has come to an end; but be sure to swing by and share your favourite moments from the series!
Manhwa & Manhua News: Check out the new Manhwa and Manhua shout-out (March 2016).
Event News: One Piece Awardshas concluded. Check the results Here!
MangaHelpers > Manga > Browse > Azumi
Home
Chapters
Translations
RSS 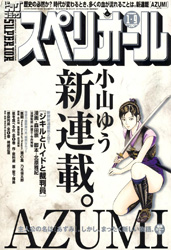 A young woman, Azumi, is brought up as part of a team of assassins, charged with killing three warlords that threaten Feudal Japan with an agenda of war and bloodshed. The manga begins an indeterminate number of years after the Battle of Sekigahara, but as Azumi begins her assassination missions, the manga introduces the characters into mainstream history.