Like us on Facebook, follow us on Twitter! Check out our new tumblr page. :)
Manga News: Toriko has come to an end; but be sure to swing by and share your favourite moments from the series!
Manhwa & Manhua News: Check out the new Manhwa and Manhua shout-out (March 2016).
Event News: One Piece Awardshas concluded. Check the results Here!
MangaHelpers > Manga > Browse > Bat X Dragon
Home
Chapters
Translations
RSS 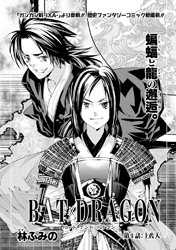 The time is Sengoku in feudal Japan, in the land of Tosa. The Chousokabe family lives in Castle Okou with Kunichika as the head of the clan. He plans on invading neighboring states to control more land and bring prosperity to the people. However, the son, Motochika, disagrees with his father’s course of action and refuses to take part in the warfare. The angered Kunichika throws his son into a river and disowns him. Motochika struggles to stay afloat and eventually loses consciousness but washes up on land alive.

Confused as to why he washed up on the beach and there is no Castle Okou in sight, he asks the people and learns he is hundreds of years in the future and the Chousokabe family has not been heard of in years. Still not wanting to believe the reality of the situation, he wanders the land trying to make sense of the matter. Through a turn of events, he meets Sakamoto Ryouma, the famous revolutionist of the 1860’s. Will Motochika help Ryouma overthrow the feudal empire, the same government he grew up in? What destiny holds for these two characters from different centuries that never even should have met in the first place? [vyc]

There's no translator here ?
What a shame...
I would enjoy doing Bat X but we really need a Jap/US translator... Permalink " "