Like us on Facebook, follow us on Twitter! Check out our new tumblr page. :)
Manga News: Toriko has come to an end; but be sure to swing by and share your favourite moments from the series!
Manhwa & Manhua News: Check out the new Manhwa and Manhua shout-out (March 2016).
Event News: One Piece Awardshas concluded. Check the results Here!
MangaHelpers > Manga > Browse > Date Bashira
Home
Chapters
Translations
RSS 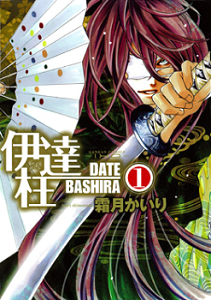 Date Bashira is a series of stories about the Sengoku era in Japan. However, unlike most textbooks and historical mangas, Date Bashira does not focus on the Shogun or famous figures in history. Instead, it brings to light the untold stories of the things surrounding these famous figures. For example, one story tells about the role of how beautiful young men were always accompanying the shoguns into battle. As women were not allowed into a battle zone, the warlords would use these teenage boys to satisfy their sexual urges.

A different chapter tells the history of the wives of the Shoguns and focuses on the female role in the Sengoku era. As young women were forced into arranged marriages, usually as peace offerings or spies, their husbands usually die in battle at a very early age, as it was the era of war. Date Bashira discusses the idea of remarriage for these women and if they were really in love or were playing the role of a wife.

Date Bashira takes a different perspective at one of Japan’s most talked about era and even though it is informative, you never get the feeling of a lecture. The beautiful artwork, splash of comedy and the untold, yet interesting historical information really keeps the reader glued onto the pages. [vyc]