Like us on Facebook, follow us on Twitter! Check out our new tumblr page. :)
Manga News: Toriko has come to an end; but be sure to swing by and share your favourite moments from the series!
Manhwa & Manhua News: Check out the new Manhwa and Manhua shout-out (March 2016).
Event News: One Piece Awardshas concluded. Check the results Here!
MangaHelpers > Manga > Browse > BB.Hell
Home
Chapters
Translations
RSS 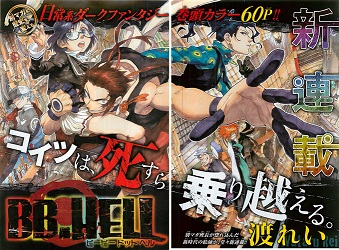 While she's patrolling the ruins of the housing complex where her father died years ago, high-schooler Himeji encounters a young man who claims to be from hell. The man, Yumeji, is apparently part of a new program, which has been started to solve the problem of hell having been filled up. Yumeji is allowed to return to Earth and work for his atonement, and he is given an ability related to his crimes (in his case, he can cut things with his hands). He can atone for his sins in three ways: by rescuing good people, by defeating bad people, or by killing others who have been released from hell. Yumeji is determined, though, that his atonement will be achieved without killing anyone. He'll have plenty of opportunity to work for his atonement alongside the justice-minded Himeji, who is already in a dangerous situation when they first meet! [tethysdust]