Like us on Facebook, follow us on Twitter! Check out our new tumblr page. :)
Manga News: Toriko has come to an end; but be sure to swing by and share your favourite moments from the series!
Manhwa & Manhua News: Check out the new Manhwa and Manhua shout-out (March 2016).
Event News: One Piece Awardshas concluded. Check the results Here!
MangaHelpers > Manga > Browse > Blood Lines
Home
Chapters
Translations
RSS 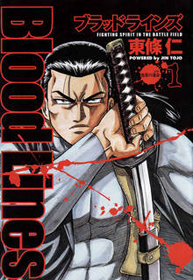 The Blood race is a secret and powerful race of humans who have lived in the dark side of society for centuries. Based on the 12 Zodiac animals, each group has an animal representing their bloodline. The blood that these people possess allows them to heal incredibly quickly and the only way to kill them is by cutting off their head. Even more, by consuming the blood of other Blood races, they become stronger. These Blood races have been secretly responsible for significant historical events such as wars.

Yabuki Tatsuro of the snake has killed and feasted on over 1,000 Blood races which makes him one of the most dangerous and powerful assassins in society. As Tatsuro kills his enemies with his gun and sword, he learns about the legendary Dragon Bloodline thought to be extinct. By consuming it, Tatsuro could be stronger beyond his imagination. [vyc]