Like us on Facebook, follow us on Twitter! Check out our new tumblr page. :)
Manga News: Toriko has come to an end; but be sure to swing by and share your favourite moments from the series!
Manhwa & Manhua News: Check out the new Manhwa and Manhua shout-out (March 2016).
Event News: One Piece Awardshas concluded. Check the results Here!
MangaHelpers > Manga > Browse > Oniwaka to Ushiwaka Edge of the World
Home
Chapters
Translations
Thread
RSS 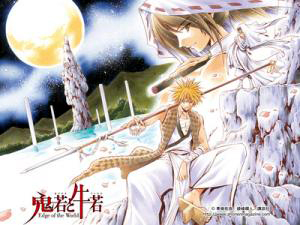 Set during the late Heian era eight centuries ago, when the Taira samurai clan held power and just before the rise of the shogunate in Japan. In the struggle between the Taira (Heike) and Minamoto (Genji) clans, the Taira appeared to have won. Most of the Minamoto family has been killed, and the Taira clan leader Kiyomori is horribly oppressing the people under his rule.

However, after the deaths of his family members, the young Minamoto Yoshitsune was hidden and trained at Kurama temple in the mountains near Kyoto. He is not satisfied with hiding in the temple all his life; it will not be long before he goes out into the world and the last chapter of the struggle between the two clans commences. This historical fantasy re-imagines the adventures of the real-life samurai leader Minamoto no Yoshitsune (Ushiwaka) and his loyal warrior monk Musashibou Benkei (Oniwaka).