Like us on Facebook, follow us on Twitter! Check out our new tumblr page. :)
Manga News: Toriko has come to an end; but be sure to swing by and share your favourite moments from the series!
Manhwa & Manhua News: Check out the new Manhwa and Manhua shout-out (March 2016).
Event News: One Piece Awardshas concluded. Check the results Here!
MangaHelpers > Manga > Browse > Boku no Shoukibo na Seikatzu
Home
Chapters
Translations
RSS 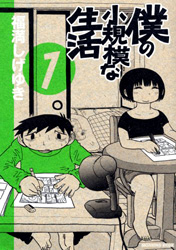 Boku no… is a semi-autobiographical story of a man struggling to break into the manga industry. The story starts with the main character trying to balance making enough money through part-time jobs to supplement his wife’s pay in order to survive with his hopes of becoming a professional manga-ka. Throughout the course of the volume’s 25 chapters, he somehow manages to work his way from being rejected by eromanga publishers to getting serialized in a major one (guess which one it is!). This, of course, does not stop him from losing sleep chapter after chapter over his various arguments with his wife (who gradually gains weight over the course of the volume–she seems to be a fan of the idea of comfort food) over small things which generally end with her getting violent, his social slip-ups, his thin finances, his fragile position as a professional manga-ka, and life in general being rough. We follow the main character around to his various meetings with editors and industry folks, his attempts to start a band with a friend, and basically every part of his often-miserable, but slowly proceeding life. [From 2chan.us]