Like us on Facebook, follow us on Twitter! Check out our new tumblr page. :)
Manga News: Toriko has come to an end; but be sure to swing by and share your favourite moments from the series!
Manhwa & Manhua News: Check out the new Manhwa and Manhua shout-out (March 2016).
Event News: One Piece Awardshas concluded. Check the results Here!
MangaHelpers > Manga > Browse > Bokura no Koi wa Shi ni Itaru Yamai no You de
Home
Chapters
Translations
RSS 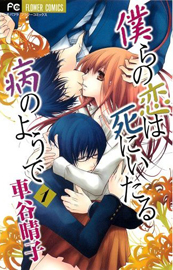 As children, Aki became acquainted with a four-year old Akane. Meanwhile, Sora confessed to Akane that he'll propose to her when she turns 18. Unfortunately, he died in a traffic accident. He then appears before Akane, Masaru, Aki's younger twin, with the voice, figure and everything else like him. Masaru, had to confront the twisted love and affection given to him by Akane, instead of Aki from...?!
[From Midnight Scans]