Like us on Facebook, follow us on Twitter! Check out our new tumblr page. :)
Manga News: Toriko has come to an end; but be sure to swing by and share your favourite moments from the series!
Manhwa & Manhua News: Check out the new Manhwa and Manhua shout-out (March 2016).
Event News: One Piece Awardshas concluded. Check the results Here!
MangaHelpers > Manga > Browse > Matsuri Special
Home
Chapters
Translations
Thread
RSS 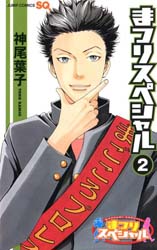 Matsuri is a girl like all the other high school girls. She likes boys, especially one called Wataru, but he hardly notices her even though she watches him like a crazy gal. "Tough girls aren't my type," he once said, and now even three street guys call her a tough chick?! Nothing too good to say to the wrestling Princess. Being this kind of princess is nothing to be proud of for Matsuri so it's a secret that she keeps from her school mates, because it's her father who wants to make her a wrestler...but what will happen when she's discovered fighting those three guys by Arata, the bad boy who can even "fight cows"? Discover it and keep track of Matsuri Special!