Like us on Facebook, follow us on Twitter! Check out our new tumblr page. :)
Manga News: Toriko has come to an end; but be sure to swing by and share your favourite moments from the series!
Manhwa & Manhua News: Check out the new Manhwa and Manhua shout-out (March 2016).
Event News: One Piece Awardshas concluded. Check the results Here!
MangaHelpers > Manga > Browse > Bus Gamer
Home
Chapters
Translations
RSS 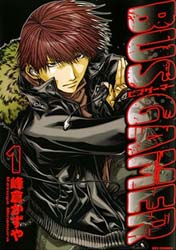 Toki Mishiba, Nobuto Nakajyo, and Kazuo Saitoh are hired to play the Biz Game, a game much like capture the flag, only with company secrets and insane amounts of money involved. At first they think it's a crazy but fun way to get some money, but as the game goes on, they hear stories about mysterious deaths on the news, and recognize the victims as members of the teams they've beaten in the game. When one of the losers of a game dies right in front of them, they realize what is really at stake - their very lives!