Like us on Facebook, follow us on Twitter! Check out our new tumblr page. :)
Manga News: Toriko has come to an end; but be sure to swing by and share your favourite moments from the series!
Manhwa & Manhua News: Check out the new Manhwa and Manhua shout-out (March 2016).
Event News: One Piece Awardshas concluded. Check the results Here!
MangaHelpers > Manga > Browse > Byoutou Shoujo Kan
Home
Chapters
Translations
RSS 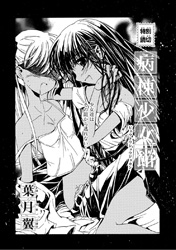 It was three months ago when Souka suffered a seizure... The name of the illness is the "I-Type Vibeil Outbreak." To summarize the illness, it basically multiplies the antibodies inside of her body by enormous amounts, causing the antibodies to attack her own body, which will eventually lead to her death. There is no cure for this illness, but there is one treatment. That is to deliver her antibodies to another patient, Cildy, by biting into her body to transfer the antibodies. Cildy also carries an illness called the "Louge Golge Syndrome" which is the complete opposite of Souka's I-Type Vibeil Outbreak and Cildy carries no antibodies, which will cause her to become vulnerable to diseases. The two need each other to survive, but they notice as time passes that Cildy is becoming weaker and weaker. At the same time, Souka hints at a secret that Cildy carries with her. That secret veils all the facts about their diseases... [Mamo]

Can anyone translate this manga in english please? TY Permalink " "