Like us on Facebook, follow us on Twitter! Check out our new tumblr page. :)
Manga News: Toriko has come to an end; but be sure to swing by and share your favourite moments from the series!
Manhwa & Manhua News: Check out the new Manhwa and Manhua shout-out (March 2016).
Event News: One Piece Awardshas concluded. Check the results Here!
MangaHelpers > Manga > Browse > C - Message to Complex People
Home
Chapters
Translations
RSS 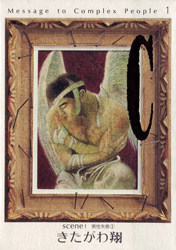 A series of stories about people with complicated issues, by the author of Hotman.

There are 4 stories, published in 10 volumes.

1) Dansei Shikkaku 男性失格: (Vol 1-3) While dating a beautiful older woman, the extremely nervous high-school boy, Amano Itaru, was humiliated by his inability to achieve an erection. Several years later, he has developed feelings for his close friend Yuka. Sadly, he can't bring himself to tell her because he feels that she deserves better. In the meantime, his heart is further confused by his attraction to a cute gym instructor he met by chance, Sasaki Yukari. Will Itaru be able to grow and overcome both his impotence and his feelings of inadequacy and find his way to happiness?

2) Magenta Harem マゼンタハーレム:(Vol 4-6) After falling in love with a painting, Iwasaki Shiho chose her next school, a crazy art school filled with creative students, specifically in order to meet the artist, Kuzumi Yura. When a friendly boy, Todsuka Kengo, eagerly drags her to the art club, she thinks her time has finally come! But, to her horror, Kuzumi is no longer a painter. Instead, he spends his time working with his edgy dance group and claims he has no interest in painting. Shiho feels there must be more to the story, for someone so talented, than a simple dislike for painting.

3) Monroe Joke モンロージョーク: (Vol 7-9) Wandering around drunk one night, Kikuchi Masamune hooks up with a random woman. In their hotel room, he explains that his late father is the head of the Kikuchi Department Store, and that he wants to run away from home and become a TV producer instead of carrying on the lucrative family business. The girl, Morikawa Seira, takes this wonderful opportunity to steal a photo of his father and fake her way into the family as his illegitimate sister!

4) Hontou no Yukue ほんとうの行方: (Vol 10) Nakahara Yuta isn't very good at school, but he loves baseball and his caring parents. After he unexpectedly loses the second of those things, he finds himself living with the unsympathetic family of his father's brother. Years later, it is a miserable and damaged Yuta who enters a new school that is terrorized by the son of a yakuza, Taniguchi. Among his victims, such as the social pariah Hosaka Tomomi, Yuta finds people just as hurt as he is. Will Yuta be able to find the strength to continue to live?
[tethysdust]