Like us on Facebook, follow us on Twitter! Check out our new tumblr page. :)
Manga News: Toriko has come to an end; but be sure to swing by and share your favourite moments from the series!
Manhwa & Manhua News: Check out the new Manhwa and Manhua shout-out (March 2016).
Event News: One Piece Awardshas concluded. Check the results Here!
MangaHelpers > Manga > Browse > Captain Tsubasa <World Youth Special> The strongest opponent! Holland Youth
Home
Chapters
Translations
Forums
RSS 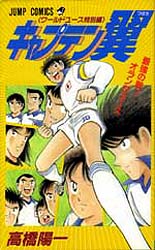 3 years after their victory in the Jr. Youth tournament held in France, Japan is going to have 3 test matches against Holland. Most of the japanese members will be choosen among the players of the national High School Soccer tournament... But will Tsubasa, playing in Brazil join them? And are the rumors about Wakabayashi being naturalized in Germany true?

A one-shot taking place after the Captain Tsubasa manga and before the manga World Youth. Tsubasa isn't in Japan anymore, the High school national championship is ending, and Japan's players will make three friendly matchs against the Hollanda Youth.