Like us on Facebook, follow us on Twitter! Check out our new tumblr page. :)
Manga News: Toriko has come to an end; but be sure to swing by and share your favourite moments from the series!
Manhwa & Manhua News: Check out the new Manhwa and Manhua shout-out (March 2016).
Event News: One Piece Awardshas concluded. Check the results Here!
MangaHelpers > Manga > Browse > Captain Tsubasa Road to 2002
Home
Chapters
Translations
Forums
RSS 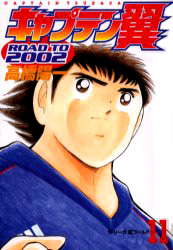 The 2002 World Cup will be held in Japan and Korea... The World Cup being their dream, Tsubasa and the others decide to take a specific road in order to be ready, their road to 2002. Most of the japanese, the "Golden Generation" started their pro career in the J-League to improve their individual skills, Misaki will soon recover from his injury to start his pro career as well, Hyuga is about to join the Juventus, Wakabayashi plans on doing a great season in the Bundesliga since his injuries prevented him from doing so last season, and Tsubasa is leaving Brazil for Europe, considered as the "most furious soccer battleground". But will they be successful on this road?