Like us on Facebook, follow us on Twitter! Check out our new tumblr page. :)
Manga News: Toriko has come to an end; but be sure to swing by and share your favourite moments from the series!
Manhwa & Manhua News: Check out the new Manhwa and Manhua shout-out (March 2016).
Event News: One Piece Awardshas concluded. Check the results Here!
MangaHelpers > Manga > Browse > Captain Tsubasa <Shonen Jump 40th anniversary>
Home
Chapters
Translations
Forums
RSS 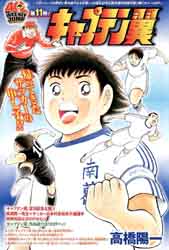 A special chapter of Captain Tsubasa, especially made for the 40th anniversary of the Shounen Jump. Tsubasa feels depressed after Nankatsu SC's victory in the National Juveniles Soccer Tournament, Roberto left to Brazil, Wakabayashi to Germany, and Misaki somewhere else in Japan with his father...