Like us on Facebook, follow us on Twitter! Check out our new tumblr page. :)
Manga News: Toriko has come to an end; but be sure to swing by and share your favourite moments from the series!
Manhwa & Manhua News: Check out the new Manhwa and Manhua shout-out (March 2016).
Event News: One Piece Awardshas concluded. Check the results Here!
MangaHelpers > Manga > Browse > Chisa x Pon
Home
Chapters
Translations
RSS 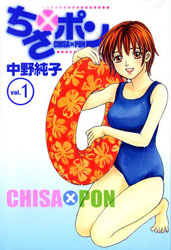 Ponta anxiously awaits the first big event in his high school life that will give him the opportunity to lose his virginity. A trip to the beach with his friends Taro and Jiro, in the company of three girls, Emi, Rumi, and Chisa. Coupling is done by janken and Ponta ends up with Chisa, the girl of his preference. His plans fail miserably though, when it turns out that Chisa is not so willing as he thought she would be. So, at the end of the trip, unlike his friends who tease him about this failure, he still remains a virgin. To his friends' surprise though, Chisa turns around and asks him to keep in touch.

Thus begins the romance between the two. Their friendship evolves into love, and like in any relationship, there are a few hurdles to overcome. For starters, Chisa is still very innocent and has good reasons not to hurry their physical relationship as much as Ponta would want to. Ponta, who has hopelessly fallen for her, decides to endure this and help Chisa uncover her womanhood. But then a terrible event happens that will become an enormous obstacle for the couple...