Like us on Facebook, follow us on Twitter! Check out our new tumblr page. :)
Manga News: Toriko has come to an end; but be sure to swing by and share your favourite moments from the series!
Manhwa & Manhua News: Check out the new Manhwa and Manhua shout-out (March 2016).
Event News: One Piece Awardshas concluded. Check the results Here!
MangaHelpers > Manga > Browse > Crown (Nakanishi Tatsurou)
Home
Chapters
Translations
RSS 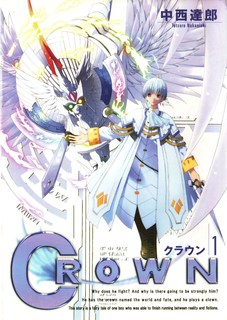 Kentaro was a normal teenager in school in the country of Kenko, but when the neighboring kingdom of Sigma launches a surprise attack, he learns a secret about himself. Sigma warriors head for the Giria Academy where Kentaro attends in order to assassinate him. He and his classmates are saved by the Sanjuki, three of the most powerful and famous knights of Kenko: Tsubasa Sho Tenkuin, Shingo Go Daireiji and Kyonosukezaemon Dan Kuronokuzu. Kentaro learns from the Sanjuki that he is the heir to the throne of the kingdom of Kenko and his life will never be simple or normal ever again! [vyc]