Like us on Facebook, follow us on Twitter! Check out our new tumblr page. :)
Manga News: Toriko has come to an end; but be sure to swing by and share your favourite moments from the series!
Manhwa & Manhua News: Check out the new Manhwa and Manhua shout-out (March 2016).
Event News: One Piece Awardshas concluded. Check the results Here!
MangaHelpers > Manga > Browse > Dämons
Home
Chapters
Translations
RSS 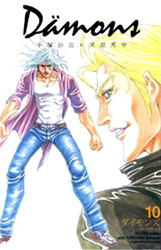 Haight and Andrews are successful engineers working for a company on the verge of developing a history-making breakthrough on nanotechnology; however, when Haight discovers a new technology that will help people live better and cure a few diseases, Andrews decides to use this technology for military purposes. Aware of his intentions, Haight resigns from the company taking all the documents and research about his discovery with him. Andrews becomes angry at this and prepares a trap for Haight. Andrews and his five maniac sidekicks brutally torture Haight and kill his loved ones, then sever both his arms and leave him for dead.

Luckily Haight is rescued by a mysterious doctor and his assistant. Both men are experimenting with the strange power of "The Zetsmos," which is the ability to control the ghost inside the body while one is still alive. Reports of people that had their limbs severed confirm that they can still "feel and move" their limbs even if they are not there, but with the Natural power of the Zetsmos, the body can assimilate any kind of materia and make it part of the body (such as wood, paper, water, metal, etc.) and recreate the limb that was gone.

However, awakening the Zetsmos is a painful and dangerous process; the bearer has to put himself between life and death to awaken it. But Haight will stop at nothing to hunt down those that made his life a living hell, and he's determined to use the mysterious power to carry on his revenge.