Like us on Facebook, follow us on Twitter! Check out our new tumblr page. :)
Manga News: Toriko has come to an end; but be sure to swing by and share your favourite moments from the series!
Manhwa & Manhua News: Check out the new Manhwa and Manhua shout-out (March 2016).
Event News: One Piece Awardshas concluded. Check the results Here!
MangaHelpers > Manga > Browse > Garouden Boy
Home
Chapters
Translations
RSS 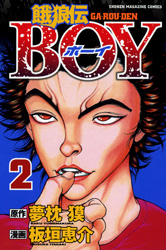 The 2 part pre-quel to Garouden: Legend of the fighting wolves. This is a side story and prequel to the main Garouden series.

Shinichi Kido has decided to become the strongest man in Japan. In a modern country, the way to do this is to succeed at all tests, graduate at the top of his class at Tokyo U, enter a company and rise to the position of CEO. For now, though, he's just in high school.

However, his life changes forever one day when he sees a man in Kabukichou who charges people ten dollars for a one minute sparring match. Shinichi watches as all sorts of powerful and skilled rough types take the guy on, but after hours, he hasn't been touched once. Fascinated, Shinichi finds the man's home only to find ou that he's quit - someone beat him up. Leaving the man's apartment, Shinichi meets Tanpa, the middle-schooler who beat the unbeatable boxer, who can break rocks with his bare hands, and who shares the same dream as Shinichi - to become the strongest. [polm23]