Like us on Facebook, follow us on Twitter! Check out our new tumblr page. :)
Manga News: Toriko has come to an end; but be sure to swing by and share your favourite moments from the series!
Manhwa & Manhua News: Check out the new Manhwa and Manhua shout-out (March 2016).
Event News: One Piece Awardshas concluded. Check the results Here!
MangaHelpers > Manga > Browse > Devil & Devil
Home
Chapters
Translations
RSS 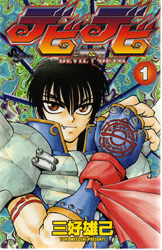 Above the Earth, there is a continuous battle between angels and devils. One devil in particular, Sword, has it in for a certain angel, Ios. In their 101st fight together, both are severely wounded. Not only that, but their clashing power causes the two to fall to earth. By chance, Sword finds a beaten, unconscious teenage boy nearby, and he is able to take over the human's body to save his own life.

Some time later, Sword awakens in the hospital, briefly confused about his whereabouts. The father of the body he possessed enters the room, extremely happy to see his boy Souma alive. Then the older twin brother shows up. Immediately, Sword recognizes his enemy's energy. Also nearly dead, Ios had joined with Kanna's body. Sword goes to attack Ios, but quickly realizes that the body is far weaker than his demon form, especially from being recently beaten to hell.

Since the brothers had been found heavily thrashed, their memory loss isn't that surprising. Their large change in behaviors is also explained by amnesia. As it turns out, Sword entered the body of the cliché nerd who can't run fifty meters without falling. Ios's new body is a terror, feared by all and constantly suspended from school. While the angel and devil have primary control over the bodies of the twins, reflex actions and memories of the other souls (still alive within the bodies) do appear. More importantly, the human bodies cannot handle the powers that Sword and Ios had used with ease. This a problem especially for Sword who is both over eager to use his powers and targeted by devils and angels. [from doushi-sumeragi.net]