Like us on Facebook, follow us on Twitter! Check out our new tumblr page. :)
Manga News: Toriko has come to an end; but be sure to swing by and share your favourite moments from the series!
Manhwa & Manhua News: Check out the new Manhwa and Manhua shout-out (March 2016).
Event News: One Piece Awardshas concluded. Check the results Here!
MangaHelpers > Manga > Browse > Double Marriage
Home
Chapters
Translations
RSS 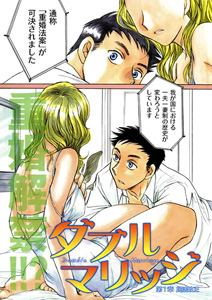 In future Japan, bigamy is legalized! Specifically, each person may legally marry two spouses, a simple legal change that brings up a lot of questions about serious romantic relationships. What would long-term relationships be like if they didn't remove you from the dating pool? Would people be more willing to commit if they knew they could also pick someone else later? Would society really jump to accept this as a new social norm, even if it had become legal?

Ikuta Naosuke, a married man, bumps into a classmate from middle school, Itou Yuko, who's had a crush on him. Yuko has grown up to be a pretty nurse, and Naosuke begins to have an affair with her. With the new bigamy laws, Naosuke wants to marry Yuko, too. But how badly would that hurt his first wife? And how will he deal with it if Yuko also finds another man to marry? Naosuke and the people around him are starting to shift towards the new and approved 'double marriage' lifestyle, but they may not be ready for the complicated problems that can arise... [tethysdust]