Like us on Facebook, follow us on Twitter! Check out our new tumblr page. :)
Manga News: Toriko has come to an end; but be sure to swing by and share your favourite moments from the series!
Manhwa & Manhua News: Check out the new Manhwa and Manhua shout-out (March 2016).
Event News: One Piece Awardshas concluded. Check the results Here!
MangaHelpers > Manga > Browse > Dragon Ball outside stories 1 in the name of piccolo daimao
Home
Chapters
Translations
RSS

Dragon Ball outside stories 1 in the name of piccolo daimao 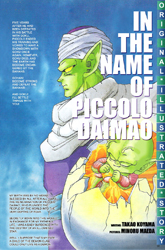 Side Story 1: ‘In the Name of Piccolo Daimao’ (ピッコロ大魔王の名に賭けて). This appeared in ‘Weekly Shounen Jump Special Edition: Dragon Ball Z Anime Special’ and focused starting from his birth from Piccolo Daimao’s egg and going up until his tutoring of Gohan and the arrival of Vegeta and Nappa. The story was by Takao Koyama, who did series composition and screenplays for the anime. The illustrations where by Minoru Maeda, who worked on the anime as a chief animator, animation director, and character designer.