Like us on Facebook, follow us on Twitter! Check out our new tumblr page. :)
Manga News: Toriko has come to an end; but be sure to swing by and share your favourite moments from the series!
Manhwa & Manhua News: Check out the new Manhwa and Manhua shout-out (March 2016).
Event News: One Piece Awardshas concluded. Check the results Here!
MangaHelpers > Manga > Browse > Ushio to Tora
Home
Chapters
Translations
Thread
RSS 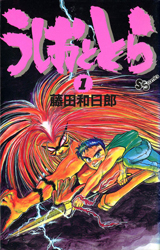 Ushio's family maintains a Shinto temple in Japan, where ~500 years ago, his samurai ancestor battled that same tiger to a standstill, and eventually trapped him against a rock using a blessed spear called the "Beast Spear", which in addition to its intrinsic formidability as a weapon, can also boost the physical powers of the user. While cleaning out the temple storage, Ushio accidentally unseals the chamber Tora was trapped in. Initially, Ushio wisely refuses to remove the spear pinning Tora (とら, Japanese for tiger) down, as Tora unwisely makes the strategic blunder of mentioning that the first thing he would do upon being freed would be to devour Ushio; but Tora's unsealed presence attracts various demons to the premises, and Ushio is forced to free Tora in exchange for his help. The series focuses on their relationship, interspersed with battles against mythological foes, and with Tora's attempts to grapple with modern life and gobble up Ushio.