Like us on Facebook, follow us on Twitter! Check out our new tumblr page. :)
Manga News: Toriko has come to an end; but be sure to swing by and share your favourite moments from the series!
Manhwa & Manhua News: Check out the new Manhwa and Manhua shout-out (March 2016).
Event News: One Piece Awardshas concluded. Check the results Here!
MangaHelpers > Manga > Browse > Dragon Quest: Warriors of Eden
Home
Chapters
Translations
RSS 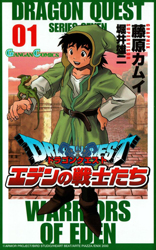 Warriors of Eden tells the story of a young hero, the son of a prominent fisherman in the village of Fishdel on Ester Island, the only landmass in the world, and his friends in a fantastic medieval-like world. They set out on adventures through the world's past and learn about its history. Upon discovering different lands in the past and solving the troubles, they reappear in the game's present-day map.

The party begins their adventure when the hero and Keifer discovers a mysterious fragment of a map his father brings home from a fishing trip. Further investigations lead him to discover that the world he lives on, which seems to consist of only his small island, used to contain many continents that have somehow been sealed away. By placing found shards on pedestals in Estard's ruins, the Hero and his friends are sent to different lands in the past which the party eventually realizes. Once they solve the problems in the area's past, the landmasses appear in the present.

Note -- Put "on hold" following volume 14. The author has indicated no plans of resuming the series, citing that too many divergences from the game plot had cropped up in the course of his writing to justify continuation as of present time.