Like us on Facebook, follow us on Twitter! Check out our new tumblr page. :)
Manga News: Toriko has come to an end; but be sure to swing by and share your favourite moments from the series!
Manhwa & Manhua News: Check out the new Manhwa and Manhua shout-out (March 2016).
Event News: One Piece Awardshas concluded. Check the results Here!
MangaHelpers > Manga > Browse > Fire Emblem - Hasha no Tsurugi
Home
Chapters
Translations
RSS 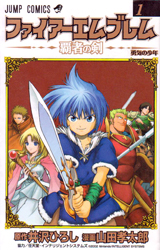 Back Story:
Taking place on the fictional continent of Elibe and stars Roy, the son of Fire Emblem protagonist Eliwood. Roy leads the League of Lycia's army against the forces of the militant country of Bern shortly after his father falls ill.

The story begins when King Zephiel, ruler of the kingdom of Bern, finishes the brutal conquest of Ilia and Sacae and sets his sights on Lycia. With the war coming to his own country, Roy is sent home to lead Pherae's army to oppose Bern, but soon after he meets Guinevere, the princess of Bern and Zephiel's younger sister, who has escaped from her homeland to search for a way to stop the imminent war between Bern and Lycia.

Upon the death of marquess Hector, Roy carries on the Lycian League and makes many promises: to protect Princess Guinevere and Hector's beloved daughter, the mage Lilina, and most importantly, to save the entire continent from Zephiel's mysterious thirst for world domination.

Featured Story:
But this story's hero is Al, son of a Bernian blacksmith. After turning 15 he left his home with his father's sword to go on an adventure in this continent bound for war.

It only took me 2 chapters to get me interested.
The one thing I liked about this series is the way it correlates with the Fire Emblem Game of the Nintendo Product, "Gameboy Advance".

If you loved the RPG game(s), you should definitely consider reading this. It gives you an inside look on the history of the tragedies that formed.

The translated volumes are very inconsistent with qualities. One chapter could look better than the other. So when reading this, don't look onto the artwork as much. Just try to follow up with story.

Over all, I give this manga an 8 out of 10.
The art work was great but I felt it was still missing something.
Considering that this manga came out before the game makes you understand why characters where featured more than the other and why the story wasn't as adept as it was supposed to be expected.

The character starts out as a "Kid Goku" type of character from "Dragon Ball". I would mistake him for Goku..if, and only if, he had a tail...considering how he started out happy willing, had incredible durability, seemed pure hearted, and never gave up whenever odds were against him.

In conclusion, this manga was very "SHOUNEN". It makes you want an "experienced mangaka" to create even a better story for this type of series. the only thing I could say this manga was missing was either realism (to some extent) and more correspondence with the games of Fire Emblem 7 - Sword of Seals and Fire Emblem 8 - Blazing Sword. If only there were more seriousness for better character development, I would LITERALLY give it a 15 out of 10. All in all, it was a good read.