Like us on Facebook, follow us on Twitter! Check out our new tumblr page. :)
Manga News: Toriko has come to an end; but be sure to swing by and share your favourite moments from the series!
Manhwa & Manhua News: Check out the new Manhwa and Manhua shout-out (March 2016).
Event News: One Piece Awardshas concluded. Check the results Here!
MangaHelpers > Manga > Browse > Dragon Quest: Dai no Daibouken
Home
Chapters
Translations
RSS 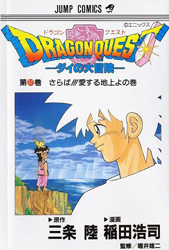 "A long time ago--there was a valiant swordsman who came to be known simply as 'the hero'. The people had been suffering at the hands of an evil demon. Upon arriving, the hero challenged the demon to a battle. The hero and his companions combined their powers and brought the battle to a swift conclusion. The demon had been defeated! Thanks to them, the despicable monsters who were once controlled by the demon were freed from the demon's evil volitions. With no one around to cause trouble, the island became a quiet place where everyone could live together in peace."

On a remote island in the southern seas lives Dai, a shipwrecked boy who dreams of becoming a great hero. One day, the evil demon king is revived, so it's up to Dai and his friends to stop him and the evil force that revived him. Along the way, Dai discovers the identity of "the hero," the truth behind the evil force who revived the demon king, and Dai's own hidden powers that surface in times of peril.