Like us on Facebook, follow us on Twitter! Check out our new tumblr page. :)
Manga News: Toriko has come to an end; but be sure to swing by and share your favourite moments from the series!
Manhwa & Manhua News: Check out the new Manhwa and Manhua shout-out (March 2016).
Event News: One Piece Awardshas concluded. Check the results Here!
MangaHelpers > Manga > Browse > Golden Time
Home
Chapters
Translations
RSS 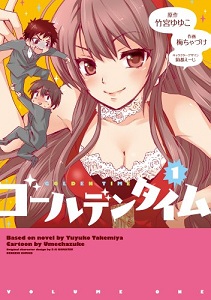 College is supposed to be a turning point for freshman Tada Banri. He plans on making a lot of friends and maybe even a girlfriend or two. On his first day of class, he meets Yanagisawa Mitsuo, whom is also pre-law, and the two hit it off great from the start. Banri soons learns though that Mitsuo has been stalked by his childhood friend Kaga Kouko. She is determined to marry him and has even followed Mitsuo to the same college! But he wants nothing to do with her and is afraid of her psychotic behavior. But Banri is instantly attracted to the beautiful and model type body and face of Kouko. It isn’t going to be easy for Banri to manage this relationship. [vyc]