Like us on Facebook, follow us on Twitter! Check out our new tumblr page. :)
Manga News: Toriko has come to an end; but be sure to swing by and share your favourite moments from the series!
Manhwa & Manhua News: Check out the new Manhwa and Manhua shout-out (March 2016).
Event News: One Piece Awardshas concluded. Check the results Here!
MangaHelpers > Manga > Browse > Gringo 2061
Home
Chapters
Translations
RSS 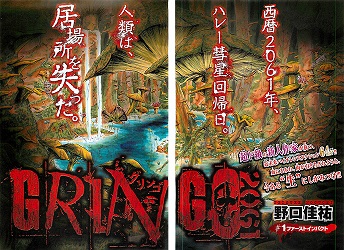 28 July 2061 was an unlucky day for Raiji, in which he was falsely accused of being a groper on public transport. That evening, he joined his friends, Yuma and Osamu, to watch Halley's Comet. The comet appeared to arrive a few hours ahead of schedule, but it didn't just pass by in the night sky. Instead, there was a blinding flash, and all the people Raiji and his friends had been watching with vanished. Not only that, but the area around them was suddenly filled with nightmarish giant mushrooms and twisted human faces. In this new, violent world, the three of them will encounter dangers human and inhuman! [tethysdust]